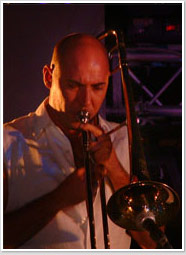 Born in Montelepre in 1967, he graduated from the music conservatory “Vincenzo Bellini” of Palermo in 1989.

Born in Palermo in 12/05/63, he is a guitar player and composer; he graduated in jazz music from the Conservatorio di Stato of Palermo “A. Scarlatti “ in 2008 with the highest marks, in the same conservatory he has been teacher of chiatarra jazz from 2011 to 2013. He currently teaches at the popular music school of the foundation “The Brass Group” of Palermo. He released three CDs in his name: Blue Flat (AWM) 2004, Ligth Frames (Comar 23) 2014, Valzer D’amor (Comar 23) 2019.  Other major collaborations in discs: Kals’art live compilation with Pietro Tonolo (Egea Music) 2005, Threee drums show with Orchestra Jazz Siciliana feat. Peter Erskine e Alex Acuna (Brass record) 2009 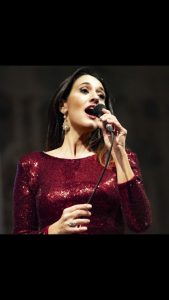 She graduated in singing from the Conservatory of Palermo with the highest marks, and has performed important concert activities in both classical, contemporary and jazz.

She performs both didactic and concert activities mainly within The Brass Group Foundation, and she represents in both fields a professional and artistic figure of national importance.

Lavinia Garlisi graduated from the conservatory V. Bellini of Palermo under the guidance of M° Francesco Sclafani
She has enhanced her study of flute and octino with international masters. She collaborated with numerous theatres and orchestras, also performing on national TV.

In parallel to her artistic activity, she has always been devoted  to the teaching the instrument, to courses of musical literacy for children and to the diffusion in schools of the study of music.
She won the national professorship competition in 2016. She has worked for eight years with the popular music school “The Brass Group” as teacher of transverse flute and Laboratory of musical propaedeutics and solfeggio. 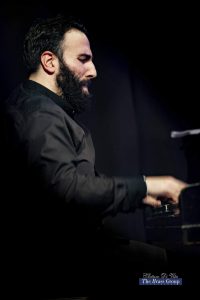 He first studied piano at 6, but he soon changed for drums at the music school “G. Pascoli” of Enna, studying under the guidance of Salvatore Borzillieri. With the Orchestra Didattica “G.Pascoli” he wins numerous national awards.

He loves Jazz, thanks in the first place to the presence of Giovanni Mazzarino, teacher at the Accademia Musicale Siciliana “Nino Rota” (after named “Enzo Randisi”).

In 2012 he starts to study Jazz at the Conservatory “A. Scarlatti” of Palermo, where he graduates in Drums and Jazz Percussions.

He has been the only italian drummer chosen by the KUG Jazz Institute of Graz (Austria) in the year 2014/2015 where he studied with the american drummer Howard Curtis and the serbian trumpet player Stjepko Gut.

In october 2015 he enters in the Orchestra Jazz Siciliana.

In october 2018 he is Jazz Drums teacher at the Scuola Popolare di Musica The Brass Group of Palermo. 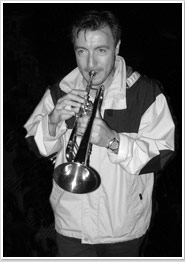 Giovanni Calderone begins his musical studies at the conservatory “ Vincenzo Bellini” of Palermo , graduated in trompet in 1990. He then followed professional orchestra qualification courses, given by the musical school “Ars Nova”.

He begins orchestral actvity with the “Orchestra Giovanile Siciliana”, directed by M.° Angelo Faja ; with this orchestra he does various concerts, and in the meanwhile he plays in the “Orchestra del Conservatorio V. Bellini” of Palermo, with which he takes paty to the recording of di concerts fof RAI . From 1988 to 1996 he collaborates with l’ A. M. S. ( Accademia Musicale Siciliana ), he does with it various concerts, in 1990 he plays with “Gruppo Strumentale di Fiati” of the Fondazioni Culturali G. Arnone , participating to many concerts for the E. A. Teatro Massimo of Palermo. From 1990 to 1994 he collaborates , even in the role of first Trumpet , with the “Orchestra Filarmonica Gioacchino Arnone”, and even with this orchestra he takes part in numerous concerts for the E. A. Teatro Massimo of Palermo .

In dicember 1990 he plays with the “Orchestra da Camera Siciliana”, under the direction of M.° Samuel Friedman; in the following years , with the same orchestra he participates to many concerts with various solists as : Kirill Rodin , Adelina Scarabelli , Pietro Ballo, Valeri Kuleshov , etc. since 1995 he plays with the “O.M.C.” ( Orchestra di Musica Contemporanea ) of Palermo, and he takes part to some premieres in Italy and in Sicily; in the O.M.C. he plays with many solists as : Roberto Gatto , Mario Raja , Katia Ricciarelli , etc. Con la stessa orchestra partecipa al “Premio Cultura e TV” registrato da RAI – INTERNATIONAL , nelle edizioni 1999 e 2000 .

In 1996 , the chamber orchestra “Gli Armonici” , he takes part to the recording of a concert , directed by M.° De Bernart , aired by RAI DUE .
He then collaborated with various orchestras as :

“Luglio Musicale Trapanese”, sotto la direzione del M° S. Mercurio ;
“Orchestra da Camera di Palermo”;
“Accademia Cantori Nuovi”; etc .
From 1999 he collaborates with the “Orchestra Filarmonica Siciliana Franco Ferrara” , with which he participates to the Concorso Internazionale per Cantanti Lirici Città di Alcamo , to many premieres , and to the “Opera Laboratorio”, schoolship for the study of Lyrical Music.

In the same orchestra, he partecipated to the incision of the disk “Luna Rossa” under the direction of the maester Marco Balderi with Pietro Ballo . In 1991 he does jazz , he follows classes and seminaries from renowned musicians as : Paolo Fresu , Marco Tamburini , Paul Jeffrey , etc. He then has an intense activity with orchestras and groups from sicilian jazz , playing in many concerts and many cutural events .

Since 1995 he collaborates with the The Brass Group of Palermo; meanwhile, he will play in the “Orchestra Jazz Siciliana”, and with important aristts as : Stefano Bollani ; Lester Bowie ; Martial Solal ; Tony Hadley ; J. Pizzarelli ; etc. In the years 1996/97 he plays with the “Open Jazz Orchestra” , in various musical reviews as : “Palermo di Scena”, “Natura Art e Jazz” , “Corleone Jazz Estate 1997”, “Carini Jazz Estate 1997”, and with the Open Jazz Orchestra he takes parte to the incision of the disk “Plays Musica Italiana”.

In 1997he plays in the disk “ANY WAY” of the saxophonist Salvo Guttilla. In november 1997 he plays with the sextet “Bop Groove”, and then with the group “Gianni Cavallaro Ensemble” he takes part to various reviews as: “Autumn Live 1997”, “Cefalù Jazz Festival 1998”, etc.

Since 2000 he plays with “Sicilia Jazz Big Band”, with which he did many concerts and recorded “Glenn Miller Story” . Since 2002 he collaborates with the “Macchina di Suoni Jazz Orchestra”, with them he did various music festivals : “Charles Mingus 80th Anniversari 2002”, “Palermo Tutta” (summer shows) , “Week-Ends on the road” and to the concert season in 2002 of the “Teatro Margherita” of Caltanissetta , in 2003 , with the same Orchestra , he partecipates to the recording of the disk “OBOE SOMMERSO”.

Teacher of Show Management and holder of the class of Musica d’Insieme ad orientamento Pop , at the Fondazione The Brass Group of Palermo of the accademic year 2016.

Co-founder of the Palermo Spiritual Ensamble, and of the concept band of iKalvi, wih whom he published “Music 4 Highways”.

He published the new disk and the new project developed with trumpett player and arranger Vito Giordano, 2 of Us, with the collaboration of Diego Spitaleri

He is the organizer and producer of concerts in Sicily from 1995, among them:

Artistic directo, technician and promoter of WOMAD in Sicily from 1998 to 2011, international “World” music festival created and directed by Peter Gabriel

Responsible of the Production of the Spettacolo #Antropocene (2017/18) with Marco Paolini (Italian Tour in the opera theaters: Massimo of Palermo, SanCarlo of Napoli, regio of Torino, Auditorium PdM Roma)

Co-Autor of the music of the scene of the “orazioni civili” named “Le parole rubate” and “I Traditori”, written by La Repubblica journalists Gery Palazzotto and Salvo Palazzolo, produced by Teatro Massimo of Palermo.

He gives masterclass in show management for professionals, also in the Conservatory A. Scarlatti of Palermo (february – mars 2019 n. 6 appointments)

Director of the Real Teatro Santa Cecilia of Palermo
Coordinator of the concertistic season Brass at Spasimo since 2017, with M. Vito Giordano, for the The Brass Group Foundation.
Producer and inventor of the concept Christmas Ladies , (The Ladies for the non-christmas season).

abrizio Giambanco is born in 1972, once he graduated he did a Licenza Di Teoria e Solfeggio in the Conservatorio A. Scarlatti (already V. Bellini) of Palermo. He is teacher of Jazz Drum, since 2010 at the C.E.S.M. of Catania, and since 2018 at the Brass Group Foundation.

In february 2007 he begins his concertistic activity in the Dusko Goyocovich Quartet at the Complesso Monumentale dello Spasimo of Palermo. In agust of the same year he plays in the Salvatore Bonafede Trio at the complesso Monumentale Tonnara Bordonaro and in the Stefano Di Battista Quartet in Messina.

In 2008 he does several concerts at the Complesso Monumentale dello Spasimo, in the Bob Mintzer Quartet and in the Flavio Boltro Quartet, and finally in the Orchestra Jazz Siciliana.

In 2009 he plays with Eilena Dennis Quartet at the Borgo Jazz Club of Genova, at the Lucca Jazz Festival and at the Bravo Caffè of Bologna, then with the Gianni Gebbia Trio in Mussomeli and with the Orazio Maugheri Jazz Quintet at the Festival Internazionale Sergio Amato in Canicattini Bagni. He comes back in Palermo playing with the Salvatore Bonafede Trio and Daniele Scannapieco in Palazzo Jung, and he continues at the Spasimo with several concerts with the Charles Tolliver Quartet, Diego Spitaleri Jazz Trio, George Cables Quartet.

In 2010 he collaborates with Flora Faja and in april he plays at the Onyx Jazz Club of Matera, at the Macerata Jazz, and in Bologna at the Cantina Bentivoglio; he also plays with the Salvatore Bonafede Quartet with Fabrizio Bosso and Piero Leveratto during the Jazz Vanguard 2010 at the Teatro Metropolitan.

In 2014 he goes on the european tour “L’Appartenenza” with Pippo Pollina & Acustic Quintet.

In 2017 he is again with Pippo Pollina & Acustic Quintet in the european tour “Il sole che verrà”.

In november he is back in Sicily and he plays in the Palermo International Jazz Festival 2017, with the Orchestra Sinfonica Siciliana, and with the Jazz Orchestra of the Conservatorio V. Bellini with which he plays again in january 2018 at the Theater Sangiorgi of Catania and at the Castelbuono Jazz Festival (Palermo). 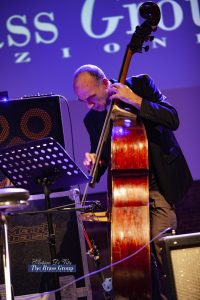 Giuseppe Costa starts his concertistic activity in 1973. He participates between 1975 and ’78 to some Rai television broadcasts conducted by Franco Cerri: “Sapere, Jazz in Italia”, “Chitarra e fagotto” and “Di Jazz in Jazz”.

In 1979 he records with the group of the vibraphonist Enzo Randisi, with whom he does various tours. From ’73 to ’80 he is a chorist of “Cantori Nuovi” group of Norino Buogo, having concerts in the main sicilian theaters. For a short period he is the first contrebass of the orchestra of the Ente Autonomo Teatro Massimo of Palermo directed by John Lewis. In 1984 he records a disk with the Reinhardt Jazz Studio Orchestra directed by Enrico Intra.

In 1986 he performs as a solist with the Orchestra Sinfonica Siciliana directed by Ignazio Garsia with the partecipation of the harmonica player Toots Thielemans. In 1986 he graduates in contrabass at the conservatory “A.Scontrino” of Trapani under the guidance of Maestro F. Muzzi, in 1987 he wins a scholarship at the Berklee School of Music of Boston and in 1989 he perfectionates in Danemark with the contrabassist Niels Pedersen. He forms with the drummer Pippo Cataldo the group Costa-Cataldo Music Project with which he records “Pictures n° one” in 1987 and “Pictures n° two” in 1990.

In 1996 he forms a duo with the pianist Marvi La Spina. He collaborates on a continuous basis with the Orchestra Jazz Siciliana, the Orchestra da Camera Kandinskij and Duke Ellington Singers. He formed a trio with Rita Collura on the soprano sax and Marvi La Spina on the piano.